San Galgano: Of Swords and Stones 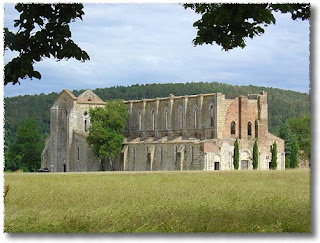 SAN GALGANO WAS BORN GALGANO GUIDOTTI IN 1148, son of Gaetano, the illiterate feudal lord of Chiusdino (a town south of Siena), and his lady, Dionisia. He grew up wild, and even the official accounts of his life say he was overbearing in his youth. This probably means he was a hot-headed and arrogant, quick to blows and quite willing to remind his peasants and burghers that he was boss, be it with their wives or daughters, or with their property. He was also quite personable with his peers, because he had many friends and a beautiful fiancée. In any case, one day 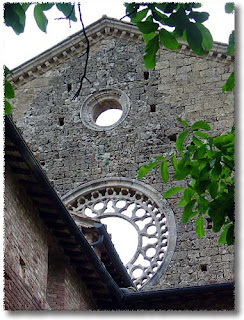 Archangel Michael appeared to him, showed him the way to salvation, and even told him where he should go. Michael must have been very convincing, because the next morning Galgano announced he was becoming a hermit and took up residence in a cave.

His family was not pleased by this sudden turn of events. Friends and relatives shuttled back and forth before the mouth of the cave, ridiculing him, while Dionisia used every wile she could think of to convince him to renounce his vows and marry his beloved. She finally got him to don his noble robes and at least pay a last visit to her. Somewhere along the way, IT HAPPENED:

His horse reared and threw him. Stunned, he felt himself lifted to his feet while a seraphic voice guided him to Monte Siepi, a rugged hill under Chiusdino. The voice bade him stand still and look up; at the top of the hill there was a round temple with Jesus and Mary surrounded by the Apostles. The voice told him to climb the hill, and as he did the vision faded. When he reached the top the voice spoke again, inviting him to renounce worldly pleasures. Galgano objected that though giving up worldly pleasures sounded good, doing so would be as easy as using his sword to split rocks. To prove his point, he drew his weapon and thrust at a stone, fully expecting the blade to snap. It sank in to the hilt, and Galgano never left the hill again. 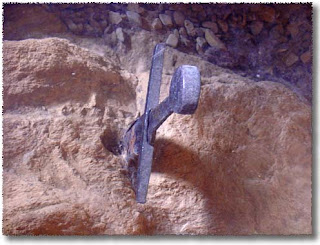 Contemporary accounts say that though he lived in poverty, he didn't renounce the world: Wild animals were frequent companions, as were the local farmers, who came to talk and ask his blessing. The good Galgano was doing in this little corner of the world soon irked Satan, who sent an evil man disguised as a monk; the wolves who lived with Galgano killed the would-be assassin and gnawed at his bones.

Just a year later, Galgano was gone, summoned home to the Heavenly Host. The funeral was a major happening, attended by bishops and three Cistercian abbots, including one who had gotten lost while trying to go to Rome. Or had he been led? The next year the Bishop of Volterra gave Monte Siepi to the Monks of the Cistercian Order, with the understanding that they would build a shrine to Galgano's memory. They began building in 1185, the year Galgano was canonized, erecting an oddly beautiful round temple, somehow reminiscent of the tomb of Cecilia Matella on the Appian Way outside Rome, with an unforgettable light-and-dark ringed ceiling, and an opening in the floor for the stone Galgano had thrust his sword into. His head, which continued to grow blond curls long after his death, was placed in one side chapel, and the gnawed bones of the arms of the evil man in another. 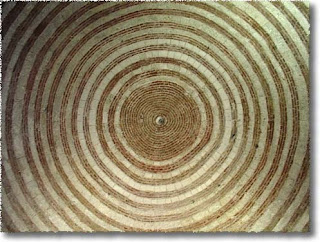 Chiusdino was a strategically important area, and Galgano proved a popular saint. The crush of visitors was such that the Cistercians were authorized to build another monastery named after the Saint a short distance away, in the valley below. Setting aside the Romanesque architecture of the round temple they built one of the most beautiful Gothic buildings in all of Italy, a masterpiece of Cistercian sobriety and functionality. The monastery rapidly became powerful, and, what's more important, respected: Monks from San Galgano were appointed to high offices throughout Tuscany, and one even became treasurer of Siena. Then the unthinkable happened. San Galgano was assigned to a succession of commendatarii, absentee abbots of noble lineage who viewed the property as something to be exploited. Exploit it they did, some more and some less, until Giovanni Andrea Vitelli removed and sold the leading from the roofs of both the round temple and the abbey in 1548. The temple survived, but the roof of the abbey collapsed. When a local noble stopped to visit a century later, he found grass in the nave, and just one monk, huddling in an outbuilding and dressed in rags so pitiful the noble was outraged. The Pope suppressed the abbey in the early 1700s and declared the round temple a parish church. 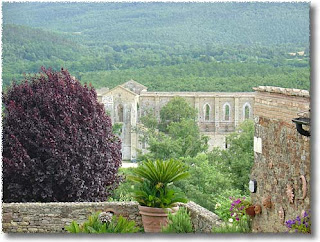 This would be just a curious legend, except for the fact that the Cistercians built to last. The round temple is still standing, and still has both the sword in the stone and the gnawed forearms (Galgano's head is now in Chiusdino). The walls of the abbey are also still standing, and it is hauntingly beautiful, a field of green with the walls reaching up to the sky, especially as dusk falls and a hint of mist rises from the valley floor.

Getting there:
San Galgano is in the Val di Merse, about 30 km southwest of Siena. To reach it from Siena, take State Highways 73 and 441, towards Massa Marittima (San Galgano is about half way between Siena and Massa Marittima). It's a very pretty drive, and the grass makes the abbey a perfect spot for picnicking. The round temple is, like most Italian churches, open in the morning. The abbey is open all the time, and during the summer months is also used for concerts and other events.
Posted by Unknown at 1:53 AM