Greetings, and (once again) apologies for being slow in putting this together. To begin with, the latest substantial thing on About is a cold cuts gallery with shots of salami, prosciutto, and so on. Just the thing when packing a picnic hamper! The latest on the IWR is instead the tasting notes from Roero. Next week I'll be adding the Barbaresco notes, and will also be thinking about how to present Barolo.

Pentacoste in Chianti
Castellina in Chianti is both pretty and unfortunate: it's atop one of the highest ridge crests in Chianti, overlooking the Val D'Elsa, and this means you can see it from quite a ways off. Unfortunately, what you note from a distance are the grain silos of Consorzio Agrario. However, behind them is a pretty Medieval town that was one of Florence's bastions in the long wars with Siena.

Didn't start out that way: Castellina's ridge crest has been settled since Etruscan times, while the current town derives from an 11th century outpost associated with the Castello del Trebbio (now Trebbia, in the Comune of Radda), and the Conti Guidi, who swore fealty to Florence in 1193.

Since Castellina is on the most direct route from Florence to Siena its importance increased, and during the 1300s it was Capital of one of the three terzieri making up the Lega del Chianti (a territorial organization Florence established to resolve conflicts with Siena, by force if need be); because of this Alberico da Barbiano, a condottiero in the service of the Duke of Milano (Siena's ally) captured and plundered the castle in 1397.

The Florentines of course rebuilt, and evidence of just how important they considered Castellina to be comes from the fact that Brunelleschi, Florence's most important architect, visited several times around 1430, while the stonemasons who had been working on Florence's cathedral were reassigned to shore up Castellina's defenses. 50 years later Castellina was just as important, and in 1478 Lorenzo de' Medici sent Giuliano Da Sangallo, another great military architect, to make further improvements -- questionable improvements, because Alfonso D'Aragona and the Sienese managed to capture the fortress and hold it until 1483.

Castellina remained firmly in Florentine hands thereafter, and following Siena's defeat in 1554 its military importance declined. But didn't completely vanish; In 1944 the retreating Germans made Castellina a strongpoint of their defensive line, and there was bitter fighting; each of the trees planted along Viale della Rimembranza, the street that crosscuts the town, is dedicated to the memory of a victim.

A visit to Castellina will take a couple of hours. There's the Rocca, or keep, which is now also the town hall, and if you walk down the main street you'll also come to La Castellina, which is both a winery and a hotel; the last time I tasted the wines, a few years ago, I found them pleasant in a traditional key, but what's really interesting is the wine cellar that's dug underground, with hulking glass-lined cement fermentation tanks and huge oaken casks to contain the fermented wine as it matures. The place has a wonderful feel to it. For more information, see http://www.lacastellina.it/azienda_e.htm 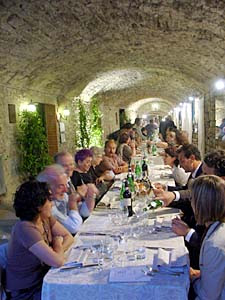 The other interesting thing Castellina has is the Via Delle Volte, a long tunnel built into one of the city walls that would have provided protection to archers in the days before cannon. It has recently been restored, and its atmosphere is delightful, especially when dusk begins to fall. It's open to the public, and is also where Castellina celebrates Pentecost, with a banquet featuring wines (mostly Chianti Classico) offered by the producers of the Comune. I was invited by the Consorzio del Chianti Classico, and had a very nice time. Despite the number of people -- 205 in all -- and the tables snaking along the 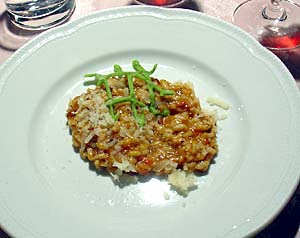 Via, which obligated the servers to hustle back and forth, the service was competent, friendly, and quick. And the food, prepared by Sonia and Francesco of the Ristorante Albergaccio (just outside Castellina) was superb. Bottom line: Chianti is quite pretty in the spring, and if you happen to be near Castellina at Pentecost, make reservations for the banquet. You won't regret it.

Supporting Artisans
Continuing in a travel-related vein, when I moved to Florence in 1982 there were still many artisans, and if you visited the outdoor market surrounding Florence's Mercato di San Lorenzo, you could find all sorts of locally produced goods, ranging from leather jackets to picture frames. It was a market, and you had to go from stand to stand, but there were some very fine things to be found, and if you left the market to explore the shops in the surrounding alleys the quality simply got better.

No longer, alas: One of Elisabetta's cousins works for a silversmith, a large outfit outside Florence that used to make picture frames, flatware, and decorative pieces that were quite nice. He liked making the pieces, but now his job consists of uncrating stuff from China, affixing the company logo to the pieces, and packing them for shipment to stores. The situation around San Lorenzo is similar, and now much of what you'll find for sale, especially in the market stalls, was cheaply made elsewhere, while local artisans are getting squeezed.

Florence, as you might imagine, is not happy about this situation; the city has been renowned for its handcrafts since long before the renaissance (which sprung from said traditions), and the assessori who work with the artisans are acutely aware of the fact that when a tradition vanishes, it's gone for good. So they have begun to actively support Florentine artisans, organizing free walking tours of the Oltrarno (the left Bank, where the artisan traditions are strongest).

The tours, which take place Mondays and Thursdays, begin at 3 PM from Piazza Pitti and take 3 hours, with visits to 3 of the roughly 20 Artisans who have decided to take part in the program. They're free, but you do have to make reservations, calling on 055 303 6108 or emailing to itinerary.turistici@siwebsrl.com. As another option, you could pick up a copy of the Artigiani D'Oltrarno brochure from your hotel or the tourist office, and visit the artisans listed on your own. It will be a different, and very entertaining way to spend a day. Moreover, if you do decide to buy something, you can be quite certain what you're getting is unique, and not some ersatz replica.

The tourist offices have organized something similar for those who want to take a trip out into Chianti, where there's much more besides wine -- terracotta and ceramics, basket weaving, saffron production, and cold cuts, to name a few things, and of course the countryside. The itineraries (there are two, one to Tavarnelle, Barberino, and San Casciano that ends with a stop at Macchiavelli's home, and the other to San Donato, Panzano, Greve, and the walled citadel of Montefioralle) take a full day, and there is a charge: 15 Euros per person, which is quite reasonable. Departure time is 8:45 AM Thursday mornings from Piazza Adua, with return at about 4 PM. To make reservations contact the Agenzia Machiavelli Viaggi in San Casciano, by phone on 055 8228073, or by email at chianti@machiavelliviaggi.it.

These tours are the sorts of things other areas where artisans are being squeezed could also organize, and at the press conference organized to promote the initiative, we were told Florence's APT is also planning to set up an online shop where participating artisans will be able to showcase their products, take orders, and ship directly to people's homes. An incentive for artisans who are willing to open their shops, we were told, but it's also a way for them to increase their client base, and is, again, something that artisans elsewhere could also do. Anything that helps preserve cultures and ways of life is beneficial to us all.

Rain!
Winding down, Thursday it started to get dark at about 3 PM, and at 4 the heavens opened; in a matter of minutes the street that goes by Daughter Clelia's nursery school became a whitewater torrent. Cloudbursts of this sort tend to be brief and local, but this one wasn't; it extended all the way from Greve, past Florence, and on to Barberino Val D'Elsa (a circle at least 60 km in diameter) and though the rain did let up some after a time it lasted for more than 2 hours, and dumped close to 2 inches of water on Florence -- a record. The drains backed up in Florence's Oltrarno, and the entire neighborhood was at least ankle-deep in rushing water that filled cellars and invaded shops and homes; a friend who has lived on Via Dei Serragli (the street from Porta Romana to the river) for 25 years told me she had never seen anything like it. I'm very glad we no longer live on the ground floor in the Oltrarno.

Kyle Phillips
Editor, The Italian Wine Review
http://www.italianwinereview.com
Want to comment? Drop me a line at Kyle@cosabolle.com
Posted by Unknown at 2:00 AM No comments: