Almost Wordless Wednesday: Between Here And There 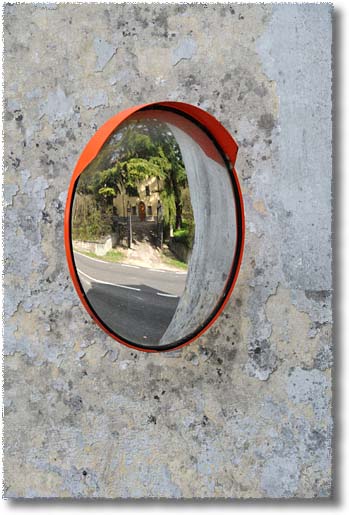 I took this shot during the Pelleginaggio Artusiano in the spring of 2011. The mirror is somewhere between Castrocaro Terme and Portico di Romagna (on the road from Forli to Florence), and I would never have noticed it if I hadn't been walking -- driving or otherwise riding is fine for vistas, but is much too fast for details like this, which was tucked away where only people emerging from the driveway across the street would normally see it.

Leonardo has organized another Pellegrinaggio this fall that I won't be doing. It'll be from Modena to Florence going through the quake-struck parts of Emilia, and though it does beckon the distances are more than I can cope with: 42 km, a marathon, one day, 39 the next, and so on. Also, wife Elisabetta, who has been dealing with health problems since April, is still not well. I will go -- hesitantly -- to food or wine events, but going to walk my feet off doesn't seem right.

Next, we're still working on how to set up the revised Cosa Bolle in Pentola, so no new recipes quite yet, though I do have an interesting Halloween idea. In the meantime, I have posted notes for Michele Chastellani's wines, pleasant Valpolicella wines in a rather modern key.

Finally, some sad news: Angelo Rocca, the man behind Rocca Albino, one of the more innovative (and critical) winemakers in Barbaresco, died this week when his ultralight crashed in the fog. I didn't know him well, but did like him, and will miss him.
Posted by Unknown at 12:00 AM No comments: