Sardegna: Being the 153rd issue of Cosa Bolle in Pentola

Greetings! Got back from spending a week in Sardegna a few days ago, and am still mulling over the trip. But to start off with, the latest on the Italian Wine Review is a quick rundown of some of the wines produced by the Gruppo Italiano Vini and before then I celebrated the birth of Alberto Alessandria with a writeup of the wines his dad Fabio and grandmother Marina Burlotto make at Commendator Burlotto. Superb wines, and I hope they set some aside for when he's a little older. On About I have instead put together a quick collection of recipes with fresh plums and prunes -- desserts and jams, but also some savory dishes.

Returning to Sardegna, it's one of Italy's two major islands (the other is Sicily), extending north-south in the Tyrrhenian Sea below Corsica. For some reason -- perhaps because it sits well out to sea and consequently looks much more distant from continental Italy on maps -- people don't seem to think about it as much as they do about Sicily. Their loss, because it's spectacular.

One can fly, but one must then rent a car, so we drove to Livorno and boarded a night ferry for Golfo degli Aranci, a small port just above Olbia. The passage was uneventful, save for the wakeup call at 5 AM, and after disembarking we slowly drove down the eastern coast of the island towards the Baia Sas Linnas Siccas, a few km north of Orosei. The name may strike you as Spanish and you'd be right; Sardinia was run by the Spaniards for centuries, and though the local argot in many areas predates Spanish (one exception is Alghero, in the Northwest -- the Spanish took it from the Genovesi in 1353, and when the locals, a mixture of Sardinians and Genovesi, tried to rebel in 1354, replaced them with Catalani, whose tongue is still spoken in the area now) many words do reveal influences dating to the period of Spanish rule. 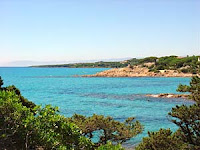 Returning to our trip, we were staying at a place called Alba Dorata, a small resort village that had several things going for it: A large pool, which Daughter Clelia took up residence in (she was already tan and got progressively browner as the week went on), air conditioning, a lifesaver because daytime temperatures climbed up into the 40s (100 plus F), and a beautiful shoreline consisting of rocky points separated by fine sandy beaches, with transparent, crystalline blue water of the sort one generally associates with the tropics.

Our two coves were easily accessible from land, which was good because we only brought sandals, but the Golfo di Orosei is one cove after another for a hundred km, and while they can all be reached from the sea (one can take an excursion, or rent a boat) many are only accessible from land via long hikes on steep, dusty trails. This might strike you as much more effort than one should undertake during a vacation, but the rewards are well worth it: the landscapes are hauntingly beautiful, bringing to mind arid regions of the American Southwest, and once one gets down to the water the diving is fantastic. Indeed, many people simply used the village we were staying at as a base, packing up and driving off (some with masks and fins, and some with tanks too) each morning.

Drawbacks? None with the village, though the sun's intensity was more than we were ready for, and Elisabetta and I both burned. So one morning we drove to Dorgali, the farming village inland that was once the area's major population center, and this offers space for a digression -- Sardinians traditionally viewed the sea with distrust, as it was a source of invaders, and therefore preferred to settle inland and devote themselves to sheepherding. As a result the coastlines were virtually deserted, save for outposts built by non-Sardinians (e.g. Alghero, established by Genova and captured by the Spanish, or Cagliari, established by the Phoenicians in pre-Roman time, and dominated by foreign powers through most of its long history), and until quite recently coastal lands were considered less valuable, and therefore went to the younger heirs (many of whom are now quite rich).

In any case, Dorgali is a one-street town whose houses are made of dark volcanic rock, and look to be quite old. Pretty, and though very touristy -- one crafts shop after another, with nice things -- and we enjoyed visiting it. Unfortunately, a morning out of the sun wasn't enough, so a couple of days later we crossed Sardegna to visit Bosa, a town on near the mouth of the Temo river, about half way between Oristano and Alghero. A beautiful drive, though countryside that became steadily drier and more desolate as we climbed into the inland highlands, where -- if you keep your eyes peeled -- you will see nuraghi, squat round drywall towers built from carefully fitted blocks of stone thousands of years ago. Some are in ruins, while others are still standing, and they confer a sense of haunting otherworldly distance to the landscape. 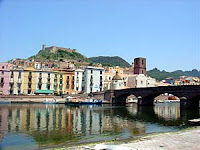 Bosa boasts a truly ancient and quite beautiful Romanesque cathedral dedicated to Saint Peter, a ways out of town (where one would never think to look, were there not signs), but like much else along the coast the town proper was founded by outsiders who wanted to take advantage of the navigability of the river to build a port: In this case members of the Malaspina family, who built a fortress overlooking the village that gave townspeople a place to withdraw to in time of need. The medieval town flourished, but in 1528 Bosa's leaders dammed the river to keep a French fleet from landing. The ploy worked, but the river mouth rapidly became a malaria-infested swamp, and the fact that the surviving inhabitants of the once-prosperous town fled rather than clear the river mouth again underscores the ambivalence Sardianians felt for the sea. The situation only improved with the arrival of the House of Savoy in the 1700s; the new rulers had the river mouth cleared and set up tanneries on the bank facing the town that are no longer operative, but offer a beautiful example of 18th century industrial architecture. The town itself is quite pretty too, and very enjoyable to walk about.

It took us almost an hour to find a place where we could enjoy the picnic lunch the folks at the hotel had packed for us -- Sardinians don't seem to go for public parks -- and then drove up to Alghero; the coast is still rocky, but by comparison with the coast around Orosei is greener and therefore seems gentler. Alghero is bustling and has a delightful Spanish feel to it, and we might have stayed longer, but the kids were wilting, so we drove home, enjoying the stark beauty of the landscape, and the colors, which gradually shifted towards purple as the sun set. 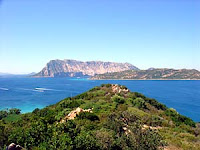 Bottom line: Italy is one of the most visited destinations in the world, but there are parts of the country one might never think to see. Sardinia, for example, but if you do go you'll find yourself eager to return again. I know we are.

Winding down with our trip, the day-to-day meals we had at our hotel were good -- the fish was very good -- but for the most part continental, with entrees one could just as easily have found in other parts of Italy. However, one night we had Porceddu, the roast piglet that is one of the mainstays of Sardinian festive cuisine.

It is, quite simply, a roast sucking piglet, but the roasting technique is masterful enough that it is one of the finest ways to cook pork one could imagine. It does require experience with fire building, and also quite a bit of wood, as the coals must burn for several hours. In terms of wood kinds, Sardinians tend to use aromatic woods along the lines of juniper or olive, though one could make do with hardwood if one had to. They also wrap the cooked piglet in myrtle, which grows wild throughout much of the island.

To make a Porceddu you will need:

While coals are accumulating, wash the piglet well, pat it dry, and salt it well inside and out. Spit the piglet -- Sardinians say a wooden stick is best, but a steel spit will also work -- and set it about 3 feet (a meter) in front of the fire.

Set the spit to turning very slowly, and cook the piglet for an hour. Baste the meat occasionally with liquid fat obtained by heating the lard over the flames, and when the piglet begins to drip bring it closer to the fire, -- about 20 inches (50 cm) from the heat. Continue roasting and basting for another two and a half hours; the meat will be done when a knife inserted into thigh emerges hot and unblooded.

At this point salt the piglet to taste for a second time, wrap it tightly in myrtle boughs, and let it rest for 20 minutes. And then carve it, skin and all, and enjoy it with a well-aged Canonau.

As is the case with popular dishes there are many variations.
Another recipe I read says to split the piglet lengthwise, spit both halves, and cook them vertically (starting at a meter and bringing the halves closer after an hour), while another says to keep the whole piglet further from the flames and cook it longer. And yet another recipe says to remove the spit from the rotisserie when the meat is done, fill a braiser with coals, and turn the piglet over it to brown it to perfection.

In other words, doing a Porceddu requires some experience in hearth cooking, and offers a fair amount of leeway in terms of technique. But the results are superb, and you can also roast a whole lamb or kid this way.

I had intended to discuss the latest (interesting though predictable) developments of Italian politics, but they will have to wait until next time.

This time's proverb is Sardinian: Mezus bastonadas de amigu chi non lusingas de inimigu - Better a beating from a friend than flattery from an enemy.

PS -- Please forward this to anyone you think would enjoy it! If you would like to read past issues (nothing in them really gets stale), you'll find recent ones at Cosa Bolle.Com, http://www.cosabolle.com, and older ones at http://italianfood.about.com/blbol.htm.
Posted by Unknown at 3:20 PM 1 comment: