Monte Forato, Risotto & More: Being the 163rd Issue of Cosa Bolle in Pentola

Greetings! It has (again) been entirely too long since the last issue. I spent August on the coast, at Cinquale, alternating between working on About Italian Food and the Italian Wine Review, and taking daughter C to the beach -- we were with my inlaws, who were quite happy to host us, but are no longer able to take an 8-year-old swimming. Cinquale is on the thin strip of flatland between the sea and the Apuans, and if you swim out a ways and look inland, you'll see (on a clear day) a mountain with a spot of blue in it: it's called Monte Forato, the holed mountain, and I spent quite a bit of time looking at it. But before we get to it, the latest on the sites:

On Italian Food, in addition to putting up a number of recipes I have taken a look at scaloppine, which are usually veal scallops, though one can also use other meats, including chicken or turkey breast, boned pork loin, and fish including swordfish. I also went to visit Barbara Lucchi, of the Vecia Cantena d'La Pre' in Predappio Alta, and took pictures as she prepared a traditional ciambella Romagnola, a ring cake that's wonderful dipped in coffee or caffe' latte in the morning, or with Albana di Romagna at the end of a meal.

On The Italian Wine Review I've taken a look at Ortrugo, a newly rediscovered white wine from the Colli Piacentini. It can be still or sparkling, and dry or sweet; I find it to be more successful as a sparkling wine -- it's about 11% alcohol, quite zesty, and very pleasant to drink. I've also written about Podalirio, a recently developed Merlot-based IGT from Querceto di Castellina in Tuscany; they started with Sangiovese because the Merlot vineyards were immature, and have modified it over time, and the progress is interesting. And I've written about Villa's Franciacorta Satèn: Alessandro Bianchi bottled his first Satèn in 1995, and we tasted through the 2005. To be frank, I was impressed by how well the wines have aged, and it was fascinating to see how they adjusted their Satèn, which is a wine designed to be softer and more seductive than a Brut, to meet the developing tastes of Italian wine drinkers. Finally, I've posted my notes from the 2006 Roero poured at Alba Wines this year. It was a good vintage and there are some fine wines. 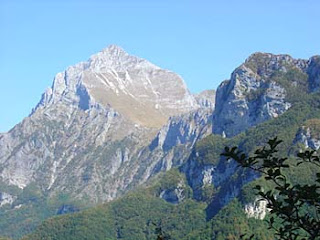 Returning to Cosa Bolle, as I said, every time I went swimming I couldn't help but note the spot at the top of the mountain, so one day I asked the people at the next umbrella, who live in nearby Montignoso year round, about it. "My father laid out the trail, came the reply. It's an easy hike from Stazzema. Takes about 3 hours."

So I procured a map, got my hiking shoes, and decided to go one morning. A hike is not the sort of thing one can write volumes about, but one can accompany notes with pictures. Briefly:

If you are driving to the area, you will want to take the A 12 (Genova-Collesalvetti) and exit at Versilia. From there, follow the signs for Stazzema, which lead into the mountains, stopping at some point to fill your water bottle and buy lunch (I got a sandwich and 2 peaches).

You can drive all the way up to Stazzema (439 m ASL) and park in the square, and I did. However, if you do you will have to walk through town (the road narrows to about 4 feet at one point), and then up a steep hill, adding about a hundred (or so it seemed) meters to your climb. So I suggest you bear right at one of the hairpin turns below Stazzema, following a sign for Casa Giorgini, an Agritursmo located in what was once the home of Admiral Giorgini, who wanted a place that offered spectacular views of mountains and sea. 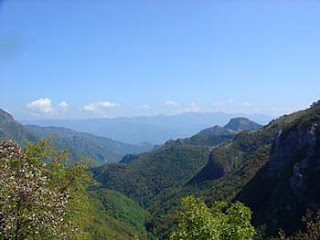 The road leads up past a sawmill, and you should park where it becomes dirt, at the mouth of the number 6 trail (you'll see a red and white CAI (Club Alpino Italiano) maker with a 6 in it). The trail is the old mule track that led up, over the pass, and down to Fornovalasco, a town in Garfagnana, and as such it is paved, with steps in the steeper parts, and though it does climb steadily it is easy going, also because it is almost entirely in shadow in the morning.

Initially you'll be walking though woods, but after about 45 minutes you'll come to Casa Giorgini (735 m ASL), and begin to see the mountains (Pania and Corchia) on the other side of the valley though the trees. A bit a bit after that you'll note that the bedrock has changed from black to white; you are now walking on the calcareous rocks that form the backbone of the Apuane and are responsible for both the marble quarries and -- where water infiltrates and dissolves -- the region's spectacular caves.

More beautiful views, a spring with bracingly cold water, and you will climb steadily; remain on the number 6 trail until you come to the pass, the Foce di Petrosciana (960 m ASL) and behold all of Garfagnana (the picture above) laid out below you. 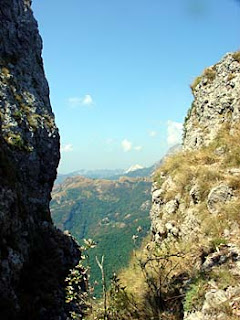 By the time you reach the pass you will have walked for about 2 hours, and be 2/3 of the way there. Exactly at the pass you will see, to your left, trail 110 that goes up the naked rock. Scramble up (at least I did), and the first quarter mile or so is steep, with a couple of sections I did on hands and knees, and one section with a rope to hold on to, and then the trail becomes wooded again and easy, though it again climbs steadily. After about 45 minutes you will come around a bend, and see a cliff. Look closer and you'll realize you're looking at the arch, and it is big. 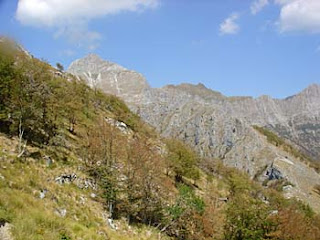 The trail circles around to the back of the arch, where I found a great many people, including a church youth group, relaxing and having lunch.

I climbed up the scree slope to slightly above the arch, found a spot (at about 1200 m ASL) with a beautiful view, ate, and relaxed for about a half hour before starting back down. 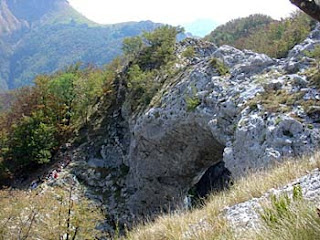 (A brief aside: The arch is impressive, at least 50 meters (150 feet) in diameter, and though one could cross it I decided not to. Legend has it that the mountain was pierced in the course of a battle between demons and hermits, or perhaps demons and the Madonna. As you behold the span, the legend doesn't seem so far-fetched.) 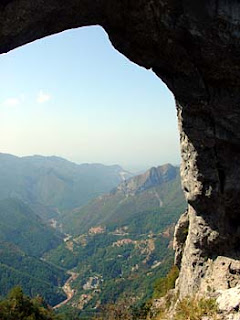 The walk down took about the same as the walk up -- 3 1/2 hours, and was noticeably warmer, because by then the sun had come around and was shining on the trail. 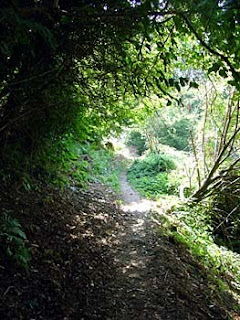 By the time I got to the head of the trail I wished I had left my car there, and not down in Stazzema proper, but the walk through town was nice -- there are some pretty houses, some dated to the 1700s, and there's a bell tower with the Medici coat of arms, dating to 1739. And, as you leave town, you'll go past Santa Maria Assunta, a pretty Romanesque church built where the Madonna is said to have appeared. The foundations date to the IX century, while the façade has a 14th century rosette. 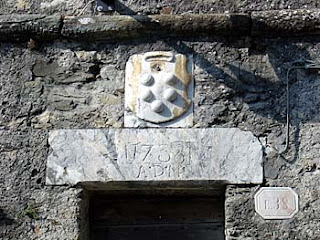 Pictures of another person's hike up to Monte Forato.

Two last things: As I said, Casa Giorgini is now an Agriturismo. There are a couple of pages dedicated to it, one in Italian and the other in English, and they have a personal page too.

The combination of fresh -- not dried -- prunes, with their sweetness and acidity, nicely balances the richness of pancetta. You could also use tart plums here, though I don't think sweeter fruit along the lines of Regina Claudia plums would work as well.

To serve 4:
Heat 2 tablespoons of butter in a pot and sauté the onion until it is translucent. Add the rice and continue to cook, stirring, until the grains become translucent, about 5 minutes. Sprinkle the wine over the rice, and when it has evaporated begin adding the broth, a ladle at a time. Add more broth as the rice absorbs it, until the rice reaches the al dente stage.

In the meantime, pit the prunes, and dice them.

Wash and dry the zucchini, and use a potato peeler to remove strips of green zucchini skin, which will act as garnish. Heat the oil in a small skillet and sauté the strips of skin until crisp. Drain them on absorbent paper.

The other thing to do is lightly broil the pancetta; if you don't have a boiler you can simply cook it in a skillet as you might bacon. Drain the cooked pancetta on absorbent paper.

When the rice reaches the al dente stage, carefully stir in the prunes, the remaining butter, the cheese, and season to taste with a little white pepper. Cover the pot and let it sit for two minutes.
Spoon the risotto onto four plates, garnish each serving with some of the pancetta and some of the zucchini strips, and serve at once.

The wine? A Rosé might be nice, for example a Bardolino Chiaretto or a Castel del Monte.

Risotto is generally seasoned with some sort of meat or vegetable, or something creamy. But there are other options, and a risotto seasoned with rosemary will have a delightful woodsy feel and provide a nice change of pace. To serve 4:
Wash the rosemary, pat it dry, and strip the needles from all but the best looking sprig. Finely chop the stripped needles.

Heat the oil in a pot, and sauté the chopped union until the pieces are translucent. Add the rice and continue to cook, stirring, for another 4-5 minutes. Remove the pot from the fire and stir in the chopped rosemary needles.

Return the pot to the fire and stir in a first ladle of broth. Add more broth as the rice absorbs it, until the rice reaches the al dente stage. As this point add a last drop of broth, stir in the grated cheese, and cover the pot for 2 minutes.

Turn the risotto out onto a heated serving bowl, garnish it with the remaining sprig of rosemary, and serve at once. A wine? White, and I might be tempted by a Greco di Tufo.

Risotto alle Noci - Walnut Risotto
With the arrival of September we enter walnut season, and even though they are available year round, fresh walnuts are nicer, and make for a simple, very tasty fall risotto. To serve 4:


Sauté the onion in 2 tablespoons of butter until it is translucent. Add the rice and continue to cook, stirring, until the rice is toasted, about 5 minutes. Sprinkle the wine into the rice, stirring, and when it has evaporated begin adding the broth, a ladle at a time. Add more broth as the rice absorbs it, until the rice reaches the al dente stage.

About 5 minutes before the rice is done (figure a cooking time of 12-15 minutes) stir in the chopped walnuts and a pinch of freshly grated nutmeg.

Remove the pot from the fire when the rice is al dente; the risotto shouldn't be dry, but rather creamy. Stir in the remaining butter and the grated cheese and let the risotto sit, covered for a couple of minutes. Turn it out onto a warmed serving dish, and serve at once, with a white wine. I might be tempted by a Vermentino dei Colli di Luni, or a Roero Arneis.

PS -- Please forward this to anyone you think would enjoy it! If you would like to read past issues (nothing in them really gets stale), you'll find recent ones at Cosa Bolle.Com, http://www.cosabolle.com, and older ones at http://italianfood.about.com/blbol.htm.
Posted by Unknown at 9:26 AM 2 comments: